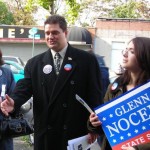 Among the strong supporters of the bill is Glenn Nocera, the Republican candidate for the open 44th Assembly District seat representing Park Slope, Windsor Terrace and Kensington. Nocera is a 21-year veteran and sergeant in auxiliary police working out of the 66th precinct.

“As an auxiliary police officer you still put on the uniform of the police department with the same NYPD logo and patches so any assault against them should be like assaulting a police officer,” said Nocera.

It is foolish to not support the men and women who dedicate their time to serving and protecting the public, and it would be a travesty and slap in the face if auxiliary officers were assaulted and nothing happened to the perpetrator, he added.